The Evangelical Church is NOT the Devil and God… 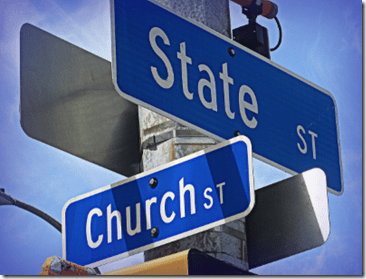 “Do not let any unwholesome talk come out of your mouths, but only what is helpful for building others up according to their needs, that it may benefit those who listen. And do not grieve the Holy Spirit of God, with whom you were sealed for the day of redemption. Get rid of all bitterness, rage and anger, brawling and slander, along with every form of malice. Be kind and compassionate to one another, forgiving each other, just as in Christ God forgave you.” Ephesians 4:29-32

I will use two examples from yesterday to “prove” my point. My best friend here goes to my church (in fact that’s where I met her.) She recently moved across town, and though she and her family are still members and are staying at our church, she also is looking for a church near her home that she can use as a “satellite” church, one where maybe she can attend a weekly Bible study or might have some activities for her kids. She grew up in an Episcopalian church in the San Francisco bay area, and she loved it. She tells me stories like how there was a really nice person who was a member, “she” was a man, was really nice and always came dressed as a woman (and from what I understand perhaps not all that an attractive one.) But the point is no one made a big deal out of it, no one celebrated the fact that “she” was different but no one ostracized her either. They were there to come together as a community of believers and worship God together.

Yesterday, still holding those fond memories of her Episcopalian background she visited an Episcopal church near her home. She was welcomed into an environment that warmed her heart. Friendly people and familiar surroundings. The first part of the service brought her joy – the tradition, the order of things. Then came the sermon. Suddenly she was bombarded with how “our candidate lost” and apparently everyone was quickly taken to a very sad place, as if in mourning. They were told how white evangelicals have sacrificed their morals by not voting for Hillary. The church had set up “grieving areas”, one area even had a place where they could paint their grief. You would have thought that Jesus had lost the election and that the jailers were coming to lock up everyone in the building before burning it down and then sending everyone to Hell. People were actually in tears during the service, and so was my friend – but not for the same reason as the others in attendance. My friend was crying because what she was experiencing was the death of the denomination as she remembered it. She ironically didn’t feel safe in this “safe place” to say that she didn’t vote for Hillary. This “inclusive” environment clearly wasn’t inclusive of those whose political opinions were different from theirs. My friend did in fact vote for a woman to be president, and it wasn’t Jill Stein either.

My own church definitely qualifies as evangelical. It headed up the city-wide Good Friday service downtown that brought 15,000 from churches all over the city as well as individuals who haven’t been to church before together to remember Christ’s sacrifice. It also supports several local organizations that help those with AIDS, food pantries, underprivileged youth in the east side of town, victims of human trafficking, the chronically homeless, even a local elementary school where a majority of students come from lower income families, and more – and that’s just within our own town. It encourages all to serve where they can and doesn’t stop you to ask if you’re gay or transgender or black or a woman or who you voted for in the last election or your opinion on a particular topic. If Christ is your savior and you want to serve, you can serve.

Before the election, any political related talk focused on regardless of who wins, Jesus is still the King of Kings (and presidents) and Lord of Lords. I’m quite sure the staff at church voted for different people, I know people at the church (and probably many more than even I might think) probably voted for Hillary. Half the church? I doubt it, but my point is this; yesterday there wasn’t one word said about the election. Why? (And this is my opinion based on what I know about my church.) It’s because we don’t live in a theocracy. We don’t live in a country where the government determines how we worship, how our churches operate. And after the election, God is still God and He still reigns above all and we are to put our trust in Him. The only thing different about yesterday’s service is that in light of Veteran’s Day we had all veterans stand at the front while we applauded and thanked them for serving to preserve the freedom that all Americans enjoy. That was it.

Oddly enough before the election I heard the same thing from both sides… “I’m concerned about our children.” Neither side was making decisions from a viewpoint of hate, both sides were seeing things from a viewpoint of love and concern for future generations. How can that be? People are different, duh! We have to learn to be okay with that. We have to learn that just because someone sees things differently than us that it doesn’t mean they want us dead and want to see the country destroyed. It IS possible to get along with and even love those we disagree with. And in fact, Jesus commanded us in Matthew 5:44-45 to “… love your enemies and pray for those who persecute you, that you may be children of your Father in heaven.” And clearly from what I’ve read in the last week there are many Christians who consider evangelicals the “enemy”.

So what conclusion should one come to from my two examples? Absolutely nothing – and that’s my point. Some churches say absolutely nothing about politics, and yet I know there are evangelical churches that are very outspoken on political topics, just as there are non-evangelical churches equally outspoken. And yet using the same Bible they have different opinions. How is it that we are so free to show grace and love to strangers who walk in our doors, and yet have none for our brothers and sisters with whom we disagree? How is it that we have allowed such bigotry toward other Christians to exist among ourselves? We are so busy vilifying each other that people are unfriending each other on Facebook. Friends have stopped speaking and families argue. Every evil stereotype that we can conjure is what we apply to the “other side” when almost none of it is true, but we don’t take the time to talk because hate is so much easier to swim in – we can do that all by ourselves.

We serve ONE God, we are ALL His children. As Christians we all “voted” for Christ in our life, we need to take everything up to a level above politics. We need to be supporting each other in the Lord’s work, not berating each other because we think God is on “our” side. My church does things and serves its community in ways maybe yours doesn’t. Yours may very well serve in ways mine doesn’t. That’s how the world should see Jesus, though us serving Him. Instead, we make other Christians to be the Devil while genuine evil exists all around us. Christians are being beheaded in parts of the world. LGBT people are being thrown to their deaths from the tops of buildings in some places of the world. There are places where VERY young girls are being used as sex slaves.

Elections are how we want our GOVERNMENT to work, what we want it to do. As Americans we should vote, it’s our most precious freedom, to choose those representatives who will make decisions on our behalf. Not all politically conservative Christians are evangelical, and not all politically liberal Christians go to Episcopal churches or those like it. We need to stop with the labels. Let’s not get to the point where we expect the government to do what Christ has called us to do. Our work as Christians doesn’t change just because once again the revolving doors in Washington have done a 360.  God has given us many different callings to meet many different needs, let’s focus on that and continue the work Christ began in us.